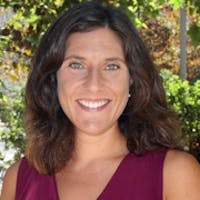 Christine Alvarado is an Associate Teaching Professor in the Computer Science and Engineering Department at the University of California, San Diego. Prior to coming to UCSD in 2012, she was an Associate Professor of Computer Science with tenure at Harvey Mudd College. Her current efforts are focused on designing curriculum and programs to make computing and computing education more accessible and appealing, with the specific goal of increasing the number of women and underrepresented minorities who study computing. Her work is funded by several grants from the National Science Foundation including a Faculty Early Career Development (CAREER) award and a CISE Pathways to Revitalized Undergraduate Computing Education (CPATH) award and a Computing Education for the 21st Century (CE21) award. In 2013 she received the A. Richard Newton Educator ABIE Award from the Anita Borg Institute for her contributions diversity in computer science education. Dr. Alvarado received her undergraduate degree in computer science from Dartmouth in 1998, and S.M. and Ph.D. in computer science from MIT in 2000 and 2004, respectively. She served on the College Board's commission to design the new Advanced Placement Computer Science Principles, and recently served as a co-chair of the NCWIT Academic Alliance. She is currently general co-chair for the 2015 Grace Hopper Celebration of Women in Computing.