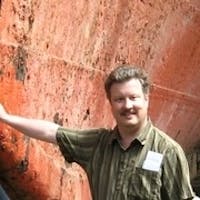 Paul Myers completed a B.Math at Waterloo in 1990, an M.Sc. at McGill in 1992 and a Ph.D. from the University of Victoria in 1996. Both graduate degrees were under the supervision of Andrew Weaver, with the Ph.D. research looking at the use of unstructured grid techniques for ocean modelling, as well as topographic interactions and JEBAR. This was followed by a postdoc at the University of Edinburgh in Scotland under Keith Haines, looking at the circulation of the Mediterranean, both at present, and during paleoclimatic times (such as during the deposition of sapropel S1). Paul then returned to Canada to take up a faculty position at Memorial University in 1999, before moving to the University of Alberta in 2001, where is is presently a Professor in the Department of Earth and Atmospheric Sciences. Paul has been active in the Canadian Meteorological and Oceanographic Society (CMOS), both locally in the Alberta Chapter (which he has chaired), in congress organization, as well as nationally. Paul was the president of CMOS in 2007-2008. He is also the chair of the Canadian National Committee for the Scientific Committee on Ocean Research. Paul's current research focuses on the role of freshwater in the oceans, as well as links between the Arctic and North Atlantic Oceans. This research involves a combination of the analysis of oceanographic data with numerical modeling as well as development of new high resolution ocean model configurations. Specific scientific questions are related to the impact of freshwater in these basins, explanations for observed variability at inter-annual and inter-decadal time scales as well as the linkages between these basins. Paul's main geographical areas of research are the Canadian Arctic Archipelago, Baffin Bay, the sub-polar North Atlantic and the Labrador Sea. In terms of data studies, this work is focused on examining the historical database to answer questions on changes in salinity, freshwater, atmospheric precipitation as well as water formation and exchanges between the boundary currents and the interior of this basin. For the Labrador Sea, Paul is the lead PI on a new NSERC CCAR Network, VITALS (Ventilation, Interactions and Transports Across the Labrador Sea - http://knossos.eas.ualberta.ca/~myers/VITALS/index.htm), which will answer fundamental questions about how the deep ocean exchanges carbon dioxide, oxygen, and heat with the atmosphere through the Labrador Sea.

Introduction to the Arctic: Climate