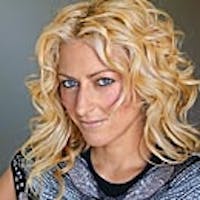 Jane is a world-renowned designer of alternate reality games—or, games that are designed to improve real lives and solve real problems. She believes game designers are on a humanitarian mission—and her #1 goal in life is to see a game developer win a Nobel Peace Prize. She is the Director of Games Research & Development at the Institute for the Future. Her research focuses on how games can be used to better anticipate hard-to-predict futures. She was the lead researcher and principal designer of the Ethical Operating System, created by IFTF in collaboration with the Omidyar Network’s Tech Society + Solutions Lab. The Ethical OS helps tech makers assess new technologies for long-term ethical risks and hard-to-anticipate harms. Jane leads the “How to Think Like a Futurist” workshop series for Stanford University Continuing Studies program, and created IFTF’s Futures Thinking specialization for Coursera, with the goal of upskilling one million global learners in creative foresight. She has created and deployed award-winning games in more than 30 countries on six continents, for partners such as the World Bank, the American Heart Association, the International Olympics Committee, and the New York Public Library. Jane specializes in games that challenge players to tackle real-world problems, such as poverty, hunger and climate change, through planetary-scale collaboration. Her best-known work includes EVOKE, Superstruct, World Without Oil, Cruel 2 B Kind, Find the Future, and The Lost Ring. These games have been featured in The New York Times, Wired, and The Economist, and on MTV, CNN, and NPR. Her TED talks have been viewed nearly 20 million times. Jane has a PhD from the University of California at Berkeley, where she researched the psychology and real-world applications of collaborative gaming. She is the author of two New York Times bestselling books, SUPERBETTER: The Power of Living Gamefullly and Reality is Broken: Why Games Make Us Better and How They Can Change the World.