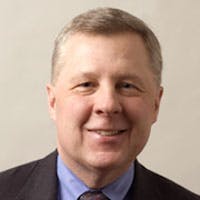 Professor of Clinical Practice, Special Assistant to the Provost for University Engagement

John C. Burkhardt serves as a faculty affiliate with the National Forum on Higher Education for the Public Good, an effort to make higher education more responsive to the needs of a changing society. He founded the National Forum in 2000 upon joining the Michigan faculty. In addition to his teaching and research responsibilities, he recently served as Director of the National Center for Institutional Diversity (2013-2016) and currently holds the title of special assistant to the provost for university engagement. The work of the National Forum has received substantial attention and investment from major national foundations for its work in repositioning education in U.S. society. While higher education plays an important role in strengthening regional and the national economy and prepares individuals for employment, it is also important to recognize the ways in which education strengthens civic, cultural, and community life and paves the way for participation in a changing democracy. Burkhardt joined the Michigan faculty in September of 2000 after serving eight years as a program director at the W.K. Kellogg Foundation. At Kellogg, he coordinated leadership grant making and projects in education and leadership development around the world. During his tenure, the foundation invested over $250 million dollars in projects to promote engagement between higher education and communities and funded several national efforts to renew the public service missions of land grant institutions, community colleges and research universities. Burkhardt was part of the Kellogg team that directed the ENLACE initiative and helped organize projects to promote leadership development for Hispanic Serving Institutions, Historically Black Colleges and Universities and Tribal Colleges. He was also responsible for leading the Kellogg Foundation’s efforts at higher education transformation in Eastern and Central Europe following the dissolution of the Soviet Union. Prior to his role at the Kellogg Foundation, Burkhardt was vice president for planning and administration at the University of Detroit Mercy. He has also been a fellow of the Institute for Educational Leadership, a Kellogg Foundation National Leadership Fellow and has held fellowships or visiting scholar positions at the University of California at Los Angeles and the Salzburg Seminar in Salzburg, Austria. In 2009 he was awarded the Exemplary Diversity Engagement Award by the National Center for Institutional Diversity at the University of Michigan. In 2004, Burkhardt served as senior policy advisor to a statewide commission convened by Governor Jennifer M. Granholm charged with setting the future direction of Michigan’s higher education system. He also served as a member of the Blue-Ribbon Commission on Higher Education for the Civic Good, appointed by the Michigan state legislature in 2004. In 2007, he was appointed by the Michigan State Board of Education to the Professional Standards Commission for Teachers. He is past chairman and current board member of the St. Joseph Mercy Hospital board of directors, a trustee emeritus of the Eastern Michigan University Foundation, and a director of the Robert K. Greenleaf Center for Servant Leadership. Burkhardt received a bachelor's degree from Oakland University, a master's degree in education from Michigan State University, a master's degree in psychology from the University of Michigan and a doctoral degree in philosophy from Michigan in 1986. Over his career his work has been supported by many national and regional foundations and agencies. His most recent book is (2005) Higher Education for the Public Good: Voices from an Emerging Movement.

Leading for Equity, Diversity and Inclusion in Higher Education