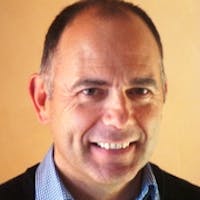 Dr. Jean-Pascal Planche (nickname JP) is currently the Vice President of the Asphalt and Petroleum Technologies business unit of the Western Research Institute established at UW in Laramie, Wyoming. His team develops solutions for asphalt material users and suppliers, both in paving and roofing applications. Prior to his current position since 2010, Dr. Planche had been working in the field of asphalt binders for Elf and then TOTAL, two major French oil companies that merged in the late 90’s, first as a research engineer, then a R&D project leader, finally as the bitumen research coordinator for TOTAL Refining and Marketing worldwide. JP has worked in the area of asphalt chemical-physical properties and binder modification for 29 years. He was inducted in 2011 into the Association of Modified Asphalt Producers Hall of Fame for life time achievement in the field of the development of polymer modified asphalts. He has been active with the Transportation Research Board (Asphalt Materials committee member), Association of Asphalt Paving Technologists, RILEM Technical Committees, the International Society of Asphalt Pavements Board of Directors (current President) and the FHWA Binder ETG for many years. He was also on the European standardization committee of bitumen during its standard harmonization phase. He has been on scientific and steering committees of several conferences. JP has a chemical engineering degree from the Chemistry national school of Mulhouse, France and a PhD in Macromolecular chemistry Science from the University of Lyon, France. He has co-authored more than 130 publications and more than 20 patents.