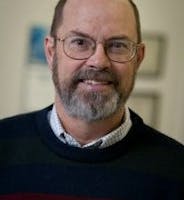 James W. Dunn is a Professor of Agricultural Economics at Pennsylvania State University. Jim has been at Penn State since 1977, doing teaching, research, and extension in the areas of agricultural marketing, agricultural policy, food industry economics, and trade. He works especially in the areas of agricultural markets, dairy markets, and price risk management. He teaches about the Economics of the Food System and Marketing Decisions. He writes a monthly Dairy Outlook and a variety of other news articles interpreting current developments in food and agriculture. Jim grew up in Sioux Falls, South Dakota. He earned his Ph.D. in Agricultural Economics at Oklahoma State University, and previous degrees from South Dakota State University. He has worked in Ireland, Mexico, Australia, Namibia, and 13 of the newly independent states in Eastern and Central Europe. He spent the latter half of 1995 as a Congressional Fellow working on the Farm Bill out of Senator Rick Santorum's office. From 1999 to 2002, he was director of the Penn State Cooperative Business Education and Research Program. In 2008, he and H. Louis Moore were the winners of the W. LaMarr Kopp International Achievement Award. He also received the Community of Teaching Excellence from the College of Agricultural Sciences of Penn State University in 2011, and the 2012 Gamma Sigma Delta Teaching Award.