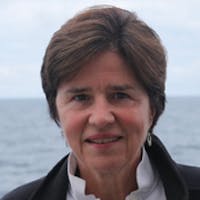 Katherine Richardson is Professor of Biological Oceanography and Leader of the Sustainability Science Centre at the University of Copenhagen. She was Chair of the Scientific Steering Committee for the scientific conference Climate Change: Global Risks, Challenges and Decisions, which sought to inform the 2010 United Nations Climate Change Conference. She was also Chair of the Danish Commission on Climate Change Policy which developed the plan for removing fossil fuels from the Danish energy and transport sectors upon which the current national energy strategy is based. She is a member of the Danish Council on Climate Change. Her research is carried out in the Center for Macroecology, Evolution and Climate and focuses on biogeochemical processes in the surface ocean and how these are influenced by climate change. Specifically, her work deals with how changes in climate and biodiversity in the ocean interact to influence the global carbon cycle. She is also a co-leader in the development of the Planetary Boundaries framework aiming to identify a safe operating space for humanity in relation to its perturbation of the global environment. Katherine has been appointed by the United Nations Secretary-General to serve on the 15-member independent group of scientists selected to draft the Global Sustainable Development Report to be published in 2019.

Transformation of the Global Food System

The Sustainable Development Goals – A global, transdisciplinary vision for the future