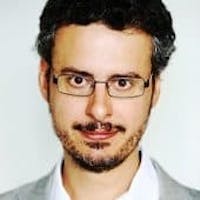 Pedro Cifuentes (Madrid) is a journalist and editor. After starting his career in the political section of the newspaper El País, he worked for five years as deputy editorial manager of the digital encyclopedia Encarta (Microsoft) in its Spanish and Latin American version. Subsequently, he interspersed freelance journalism with the coordination of online content projects for several Spanish-speaking countries and university teaching. Contributor to different media outlets on both sides of the Atlantic, he has translated into Spanish, in addition, various books by authors such as Isaiah Berlin, Anthony Giddens or Malcolm Gladwell. He teaches journalism and 'storytelling' at the IE School of Communication, in Spanish and English. Cifuentes has lived in Argentina (where he worked as a correspondent for the newspaper La Nación in Mendoza) and Brazil, where he served as correspondent for El País in Rio de Janeiro in 2014 and 2015. From the end of that year until the beginning of 2018 he wrote stories and research reports on the world of sports in El Español (Madrid). Currently he participates in the development of various content projects for the Internet.