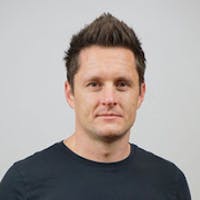 Roland Graf is a media artist, architect, and designer, who invents experimental interfaces that inspire ludic behavior and new modes of thinking about space, technology, and human interaction. From using the ground as an interface to daylight as a medium, his work explores speculative play and design as strategies for critique, social engagement and technology development, reframing the body and interactivity in the built environment. Over the past 17 years, Graf has worked often simultaneously on projects as distinct as interactive installations, urban interventions, happenings, short films, product and exhibition design, wearable devices and street video games. During this time, both his individual and collaborative work has been exhibited internationally and received awards, patents, and recognition in many of these fields, including Excellence Award at the Japan Media Arts Festival for the street video game Solar Pink Pong, Prix Ars Electronica Distinction in the Category of Interactive Art for the telematic sidewalk Bump, Winner of the Play Everywhere Challenge with the urban intervention Brightmoor Runway, Feldmark licensed to the German retailer Magazin, Slim Jim at Milan Design Week, Solo Exhibition Assocreation – taste it! at the Vienna Künstlerhaus, k/haus Galerie. Graf is co-founder of the artist collective Assocreation and has started several art & technology research initiatives at the University of Michigan, including Daylight Media Lab, a collaboration with faculty from robotics, optics and material science exploring daylight applications of optical components and entertainment electronics; Internet of Shoes (IoS), a sensory networking device/platform for street-level interactions in collaboration with embedded systems research; and most recently, in collaboration with faculty in HCI and computer engineering, iGYM, an augmented reality system for inclusive play, entertainment, and physical rehabilitation for children with mixed abilities. Since his relocation to the USA in 2011, Graf has also been collaborating with communities at the heart of Michigan’s postindustrial society – such as “Camp Take Notice” in Ann Arbor or “Black Men for Social Change” in Flint – on public art and design/build projects. Prior to joining the Stamps School of Art & Design faculty, Graf served as an Assistant Professor in the Department of Spatial and Sustainable Design at the Vienna University of Technology.