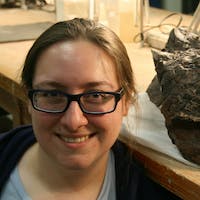 Victoria Arbour is an Instructor at the University of Alberta in Canada. Her work on dinosaurs has focused on the armoured herbivores called ankylosaurs, including the biomechanics of tail-clubbing in these dinosaurs, how many species there were, and how ankylosaurs in Alberta are related to those elsewhere in North America and in Asia. She also has an interest in the Mesozoic palaeontology of British Columbia, and is currently working on several projects related to a dinosaur bonebed located within the city of Edmonton.

She completed her BSc in Earth Sciences and Biology at Dalhousie University (Halifax, Nova Scotia) in 2006, and studied under Dr. Philip Currie for her MSc at the University of Alberta, completed in 2009. She defended her PhD dissertation research (also supervised by Dr. Currie) in December 2013.

In addition to research, Victoria is committed to science outreach and public education, and so was delighted to be involved in the initial creation of Dino101. She frequently gives guest lectures and workshops at universities, schools, libraries, and museums. She has consulted on several dinosaur media projects, including the Walking with Dinosaurs 3D theatrical release, the Discovery Channel's Clash of the Dinosaurs, and the History Channel's March of the Dinosaurs.