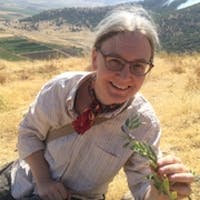 Karen Radner is Alexander von Humboldt Professor of the Ancient History of the Near and Middle East at LMU Munich and Honorary Professor of Ancient Near Eastern History at University College London. Having been trained at Vienna and Berlin, she received her doctorate in Ancient Near Eastern languages and archaeology at the University of Vienna in 1997. Between 1997 and 2005, she held academic posts at the universities of Helsinki, Tübingen and Munich and subsequently spent a decade at Unversity College London before returning to Munich in 2015. She is a member of the Bavarian Academy of Sciences and Humanities, of Academia Europaea and of the German Archaeological Institute (DAI). Radner’s books include editions of cuneiform archives from Assur (Iraq), Dur-Katlimmu (Syria) and Dunnu-ša-Uzibi (Turkey), an analysis of Mesopotamian inscriptions as “written names” (Die Macht des Namens: altorientalische Strategien zur Selbsterhaltung, 2005) as well as several edited volumes. Her most recent monograph Ancient Assyria: A Very Short Introduction (2015) introduces a general readership to the main topic of her research, the kingdom of Assyria (c. 1400-600 BC), on whose political, administrative, social, legal and cultural history she has published extensively. She has worked as an archaeologist and as a field epigrapher on excavations and surveys in Austria, Greece, Iraq, Syria and Turkey. She currently directs the Peshdar Plain Project in the Kurdish Autonomous Region of Iraq, which explores the archaeology, palaeoenvironment and history of an Assyrian frontier region in the Zagros mountains, and, together with Jamie Novotny, the Munich Open-access Cuneiform Corpus Initiative (MOCCI), which makes available online cuneiform text corpora from the first millennium BC and beyond.

Organising an Empire: The Assyrian Way