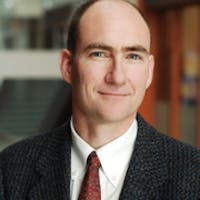 J. Edward Colgate received the Ph.D. degree in mechanical engineering in 1988 from M.I.T. He subsequently joined Northwestern University in Evanston, Illinois, where he is currently the Allen and Johnnie Breed University Design Professor and a member of the Department of Mechanical Engineering. Dr. Colgate's principal research interest are haptics and human-robot interaction. He and collaborator Michael Peshkin are the inventors of a class of collaborative robots known as “cobots.” He has served as an associate editor of the Journal of Dynamic Systems, Measurement and Control and the IEEE Transactions on Robotics and Automation, and he was the founding Editor-in-Chief of the IEEE Transactions on Haptics. He is a Fellow of the IEEE and of the National Academy of Inventors. In addition to his academic pursuits, Dr. Colgate has founded three start-up companies, and was one of the founding co-directors of the Segal Design Institute at Northwestern University. Dr. Colgate also directs the Master of Science in Engineering Design and Innovation, which combines graduate-level engineering courses with a broad exposure to human-centered design.