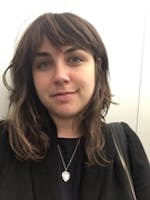 Erica Papernik-Shimizu is an Associate Curator in the Department of Media and Performance. As one of the founding members of the Department (established in 2006), she played an integral role in establishing its collecting program. She specializes in designing best practices for the stewardship, preservation, and exhibition of time-based artworks from a curatorial perspective. Recently, she has organized the MoMA PS1, New York iteration of the touring exhibition Carolee Schneemann: Kinetic Painting (2017–18, curated by Sabine Breitwieser). Previously, she was Assistant Curator in the Department of Media and Performance Art (2011–17), and organized the exhibition Images of an Infinite Film (2013) and co-organized Tony Oursler: Imponderable (2016) with Stuart Comer. As a Curatorial Assistant in the Department (2007–10), she coordinated numerous exhibitions including Marina Abramovic: The Artist Is Present (2010). Before coming to MoMA, Erica worked on a range of exhibitions at MoMA PS1 between 2005–07. She completed her BA (2004) at the University of Michigan at Ann Arbor and holds an MA (2005) in History of Art from University College London, University of London.

What Is Contemporary Art?