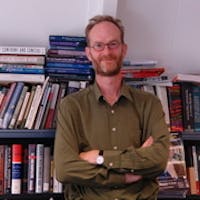 Giles Scott-Smith (1968) received his BA in European and Asian Studies from the University of Ulster in 1988, and an MA in International Relations at Sussex University in 1993. He then moved to Lancaster University for a Ph.D in International Relations, graduating in 1998. He joined the Roosevelt Study Center in Middelburg in January 2002 as a post-doctoral researcher, and was given a permanent position as senior researcher in January 2005. During 2008-2012 he was also an Associate Professor at the Roosevelt Academy (Utrecht University) in Middelburg, running the International Relations track. In January 2009 he was awarded the Ernst van der Beugel Chair in the Diplomatic History of Atlantic Cooperation since WWII at the University of Leiden, and he has been full-time in Leiden since August 2015.