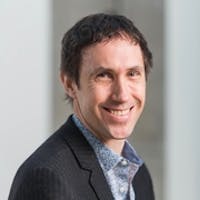 Kevin Leyton-Brown is a professor of Computer Science at the University of British Columbia and an associate member of the Vancouver School of Economics; he has lived in Vancouver since receiving his PhD from Stanford University in 2003. He studies the intersection of computer science and microeconomics, addressing computational problems in economic contexts and incentive issues in multiagent systems. He also applies machine learning to the automated design and analysis of algorithms for solving hard computational problems. He is the recipient of UBC's 2015 Charles A. McDowell Award for Excellence in Research, a 2014 NSERC E.W.R. Steacie Memorial Fellowship, a 2013/14 UBC Killam Teaching Prize, and a 2013 Outstanding Young Computer Science Researcher Prize from the Canadian Association of Computer Science. He and his coauthors have received numerous paper awards from JAIR, ACM-EC, AAMAS and LION and medals from international SAT solver competitions (2003–15). He is chair of the ACM Special Interest Group on Electronic Commerce, and serves as an associate editor for the Artificial Intelligence Journal (AIJ) and ACM Transactions on Economics and Computation (ACM-TEAC).