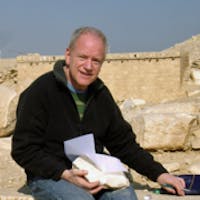 David P. Silverman is Eckley Brinton Coxe, Jr. Professor of Egyptology and Curator of Penn Museum's Egyptian Section, and one of the leading authorities on the civilization of ancient Egypt. Dr. Silverman was the national curator, advisor, and academic content creator for the blockbuster exhibition "Tutankhamun and the Golden Age of the Pharaohs.” He was also responsible for the curatorial content in the original 1977 "Treasures of Tutankhamun" exhibit and served as Curator in Chicago at the Field Museum. His extensive publications include numerous books and articles on Egyptian language, art, and religion, and he has directed several field expeditions at sites throughout Egypt. He has received many awards and honors, including grants from the National Endowment for the Humanities, the Penn Research Foundation, and The Michela Schiff-Giorgini Foundation. The Athenaeum Society of Philadelphia presented him with a Literary Award for his books Searching for Ancient Egypt and Ancient Egypt. Dr. Silverman has been a visiting professor at both L'École Pratique at the Sorbonne in Paris and Harvard University.

Introduction to Ancient Egypt and Its Civilization