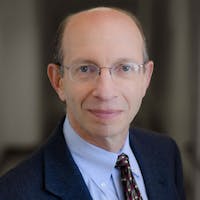 Dr. Daniel H. Lowenstein is Professor and Vice Chairman in the Department of Neurology at the University of California, San Francisco (UCSF), Director of the UCSF Epilepsy Center, and Director of Physician-Scientist and Education Training Programs for the UCSF School of Medicine. Dr. Lowenstein received his B.A. degree in Mathematics from the University of Colorado in 1973, an M.S. degree in Man-Environment Relations from The Pennsylvania State University in 1978, and an M.D. degree from Harvard Medical School in 1983. Following an internship in Pediatrics at UCSF in 1983-84, he completed his residency in Neurology at UCSF from 1984-87, serving as Chief Resident in the final year. He then did a two-year fellowship in Stanley Prusiner's Laboratory, investigating the sequence homology of the PrP gene in various rodent species. He went on to become a faculty member in the Department of Neurology at UCSF, established the UCSF Epilepsy Research Laboratory, and was the Robert B. and Ellinor Aird Professor of Neurology from 1998-2000. He then joined Harvard Medical School (HMS) as the Dean for Medical Education for two and a half years, overseeing a re-organization of curricular governance, the creation of a new educational technology program, the establishment of the HMS Academy (a novel structure for the support of the school’s education mission), and the initial planning for a major revision of the curriculum. In 2003, for family reasons, he moved back to UCSF in his current position. Dr. Lowenstein is a clinician-scientist who has studied both basic science and clinical aspects of epilepsy. His laboratory studies have addressed the fundamental mechanisms of neuronal network remodeling that occur during epileptogenesis; i.e. the process in which a normal network transforms into a hyperexcitable network capable of producing or relaying seizure activity. The main efforts of his research group focused on the various forms of cellular reorganization that are observed in humans with temporal lobe epilepsy, and the parallels between reorganization in the adult nervous system and normal developmental processes. Important findings by his team included the discovery that seizure activity in an adult model of temporal lobe epilepsy causes a marked increase in the birth of hippocampal neurons, and the recognition that numerous molecules responsible for normal development are also expressed in this same brain region in the adult. These studies bear not only on the neurobiology of epilepsy, but also on the broader issue of neurodevelopment and the capacity for regeneration in the adult nervous system after injury. Dr. Lowenstein's main clinical research is focused on approaches designed to advance our understanding of the complex genetics that are thought to underlie a substantial portion of the idiopathic epilepsies, and he is a leader of a national effort (The Epilepsy Phenome/Genome Project) designed to make new discoveries in this area (see epgp.org). He has also been actively involved in research on the management and treatment of patients with status epilepticus; i.e. unusually prolonged seizures. He has been the Principal Investigator of a prospective, multi-centered, NIH-sponsored clinical trial looking at the potential benefits of active treatment of patients in status epilepticus in the pre-hospital setting. This five-year study, completed in 1999, helped define the optimal therapy for these patients nationally, and initiated a second large project (for which Dr. Lowenstein is a Co-Principal Investigator) currently underway looking at intramuscular versus intravenous treatment modalities in this setting. Dr. Lowenstein’s efforts in epilepsy research were recognized by the American Epilepsy Society’s 2001 Basic Research Award, an honor given each year to the foremost basic science investigator whose research “contributes importantly to understanding and conquering epilepsy.” He also served as president of the American Epilepsy Society in 2003-04. Dr. Lowenstein has also been actively involved in defining scientific policy at the national level. He served a 4-year term as a member of the Advisory Council of the National Institute of Neurological Disorders and Stroke (NINDS), and has chaired a number of NINDS committees and task forces involved with overall strategic planning for NINDS, as well as the setting of priorities for research in epilepsy. In addition to his research interests, Dr. Lowenstein is an avid and highly-regarded teacher, and he has had an active role at UCSF concerning issues related to cultural diversity and civil rights. In recognition of his leadership at UCSF in these areas, as well as his long-standing advocacy for students, staff and faculty of all backgrounds, he received the 1998 Black Student Health Association’s Faculty Award, the 1998 UCSF Dr. Martin Luther King, Jr. Award, the 2006 Holly Smith Award for Exceptional Service to the UCSF School of Medicine, and the 2009 UCSF Chancellor’s Award for Public Service. Regarding his teaching accomplishments, Dr. Lowenstein has received every major award related to medical student education granted both locally at UCSF and nationally. He received multiple awards from the 1st and 2nd year classes at UCSF, including those for "A Major Contribution to Teaching," "Outstanding Lecture," "Outstanding Lecture Series," and "An Outstanding Role Model." Other major awards include the 1992 UCSF Academic Senate Distinction in Teaching Award, the 1993 and 1998 UCSF Kaiser Award for Excellence in Teaching, the UCSF Class of 1995 John V. Carbone Award for Excellence in Teaching, and Faculty Teaching Awards in 1994 and 1996. Dr. Lowenstein has given the Keynote Address for graduating students at Commencement Ceremonies at UCSF in 1994, 1996, 1997 and 2000. In 1996, the UCSF students awarded him the American Medical Student Association (AMSA) Golden Apple Award for Excellence in Teaching. He went on to receive the AMSA 1997 National Golden Apple for Teaching Excellence Award, which is given to one medical school teacher in the country each year. In addition, the American Neurological Association (ANA) named him the first recipient of the ANA Distinguished Teacher Award in 1997, and in 1998 he was granted the Alpha Omega Alpha Robert J. Glaser Distinguished Teacher Award by the American Association of Medical Colleges.