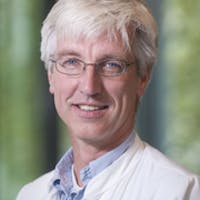 Eelco de Koning (1963) received his medical doctorate in 1991. Subsequently, he moved to England and started research into islet biology and pathology at the Diabetes Research Laboratories in Oxford under supervison of Anne Clark and Robert Turner. He obtained a MRC Training Fellowship to finish these studies which resulted in a Ph.D. thesis in 1994. In the same year he started his training in Internal Medicine followed by a fellowship in Endocrinology at the University Medical Center Utrecht (UMCU) and was board certified in endocrinology in 2001. He joined the research group of Ton Rabelink at the UMCU focusing on complications in diabetes mellitus. A Career Development Grant awarded by the Dutch Diabetes Research Foundation and a transfer to the Leiden University Medical Center with the research group of Ton Rabelink in 2004 allowed him to work on establishing a clinical islet transplantation program. He obtained a fellowship from the Joslin Diabetes Center (Harvard Medical School) in Boston which enabled him to gain expertise in clinical beta-cell therapy and to lay the foundations of a research program into human islet (progenitor) biology from 2004 to 2005. In 2006 he returned to the LUMC. He established a laboratory for human islet isolation under GMP conditions and is the director of the clinical islet transplantation program. This program is operational since 2007. Using a bench-to-bedside approach he has initiated and heads multicenter research programs on improvement of islet transplantation and use of islet progenitor cells in beta-cell therapy. In 2010 he became group leader at the Hubrecht Institute in Utrecht, the Netherlands. He is Professor of Diabetology by special appointment at the University of Leiden since November 2011.